As predicted yesterday, I was able to run my first dungeon in TERA last night.  Actually, I ran it twice, once with a full group at level and again with a mid-30's level warrior who blew through just to finish quests and get loot drops.  Though a bit hectic, I did enjoy the runs through.  It was very interesting to see the differences in running instances in TERA and other games I've played, and it was educational to see how I would have to play my Archer differently with a group compared to solo.

First, a little about the dungeon itself.  The instance is called the Bastion of Lok, and it is a large cave complex where the Devas, a demon race from what I can ascertain, are gathered in an attempt to resurrect their dead god/lord, Lok.  As you enter the dungeon, you are met with a short cut-scene that explains that the inner sanctum of the cave is protected by a door shielded by an elemental.  Thus, your first goal is to kill the elemental boss. 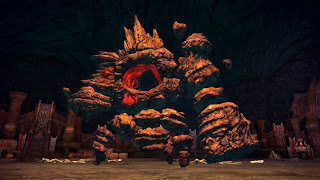 After a mixture of trash pulls, we came to the first boss who constructs in the middle of the room.  This is an impressive dungeon boss.  He is big, and he has a lot of spinning and glowing parts that just add to this sense of awe.  We defeated him easily, opening the door to the inner sanctum.

After several more trash pulls, completing quests along the way, we came to the last boss, which, after fighting for a bit, turned out to be a dual boss encounter.  It started by killing a large monster called a "Blooded Vulcan," and as it got close to death, the leader of the Devas comes to "take care of the issue himself."  This fight, while a bit more complex than the first, was still pretty easy from my point of view.  Granted I'm playing a ranged dps class, so I may have missed some of the intricacies that only the tank or perhaps melee would have seen. 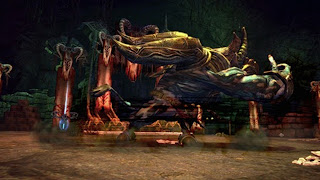 After finishing the first run, the one with the full party of five at the appropriate level, I sat back to reflect on the experience.

I decided first that I enjoyed the overall dungeon experience in TERA.  While there were some real differences between it and the dungeon experience in WoW, there were enough similarities that I didn't feel uncomfortable with stepping in for the first time.  I thought that both bosses were large and imposing, and I like those qualities in dungeon bosses; I want to feel like I'm killing the big baddies.  The trash pulls were pretty chaotic to begin.  I'm so ingrained in the culture created over the years in WoW where focus firing is of utmost importance that it took me a bit to adjust to simply attacking.  I still tried to stay on one target at a time, but with the amount of movement involved for most of the mobs, I can honestly say that it was hard to do consistently.

I was not overly impressed with the visuals throughout the dungeon.  With the beautiful and varied landscapes presented in the "outside" world, I was really expecting something special in the first dungeon a player encounters.  However, the constant cave walls with scant decorations were not exactly impressive.  The room with the final boss was a bit better with an elaborate throne area along one wall, but that wasn't really enough to redeem the dungeon as a whole.

Moving around constantly during boss fights was interesting.  I've played a hunter in WoW, and I can remember a lot of fights where I could simply stand in one spot and hit the same 2-3 buttons in rotation.  This was not the case with either of the bosses in BoL.  Both bosses moved frequently and violently, jumping and/or charging toward and away from players.  This required constant diligence on my part to stay in range and to stay away from the damage dealing abilities.  I really liked this dynamic during the fights.

I can't wait to try the next dungeon.  I hope the visuals are more appealing.  And, of course, I always like the loot drops from dungeon bosses.  During my two runs, I was able to get a blue quality bow and gloves which really added to my current gear set.
Posted by Craftygod at 11:35 AM