Working on the Chain

As I've been playing TERA Online, I've found quite a few things that I really like about the game.  As I got my character up over level 20, I found another feature of the game that I think is really neat in a lot of ways.

Somewhere between 20-22, I received a quest to head back to the main city and talk to a trainer there about glyphs.  I was not aware before this point that there were glyphs in this game, but since I've played WoW extensively, I was able to determine what glyphs probably were.  Sure enough, they were glyphs that a player can add to his skills to increase their potency in some way.  After spending about an hour looking at the different glyphs and finally deciding how best to spend my glyph points in assigning them, I settled on a few I felt would be beneficial. 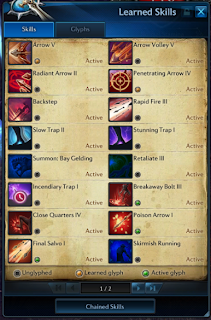 It was as I was assigning glyphs that I started realizing there was another part of using skills that I had not really understood up until this point:  Skill Chains.  I knew that skills could be chained together so that using one activates an on-screen prompt to use the next, but I didn't really realize how this system worked until I was spending time on my skills due to glyphing.  Now, I realized that I could chain all of my skills one to another so that I would have an unbroken chain through a rotation once that rotation was started.  I started setting up these skill chains, and after a couple hours of killing mobs to fine-tune it, I think I'm finally where I want to be (at least until I level to the point where I add another skill or two that I want to work in).  I actually set up two different chains:  a ranged chain and a melee chain.  I use the ranged chain most of the time to start fights and then use the melee chain when the mob starts to close with me to attack.  With these two chains set up, I can pretty much handle any normal fight by only pressing one or both of the two mouse buttons and the spacebar.  I start my ranged chain with the left mouse button and then hit the spacebar for each new skill as it is displayed through the chaining.  When the mob gets close, I hit the right mouse button to initiate my melee chain, and after that, again, I only need press the spacebar to cycle through the different skills. 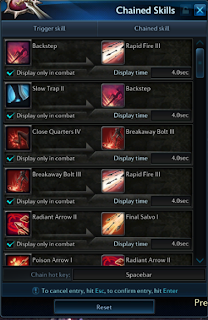 The page for chaining skills is set up pretty well (as the picture above shows), and it was easy to set up the full rotation through my skill progression.

Some may think that only hitting a few buttons would be boring in the long run, but I haven't really found it so.  For one thing, I have to be constantly diligent of the movement of whatever I'm fighting.  Mobs in this game tend to rush and jump about, and I need to be sure I'm initiating the right chain at the right time.  Also, I have to keep a steady eye on my MP levels.  If my mana drops too low, I have to break the skill chain and start using Rapid Fire or normal attacks to build it back up.  And, there is always the fact that some fights just aren't "normal" fights, so I have to be ready to adjust on the fly.  This has really been the part of combat in TERA that I have loved.  You must pay attention and be ready to adjust on a moment's notice; otherwise, you will quickly find yourself staring at a gray death screen.

Posted by Craftygod at 8:38 AM