During Christmas, my wife and I were gifted an iPad that we intended to share. For the first month, I've done very little with the device because the majority of the time I'm on my desktop or laptop playing some type of video game . . .

However . . . that all changed when I read a little about Infinity Blade II and decided to give it a try. Now, I had never played Infinity Blade, so I was going in completely unaware of what to expect, but so far, I can hardly put the game down. In fact, last night, I found myself playing IB II while sitting in my computer chair with my SW:TOR character just idling.

This game has really fascinated me in a number of different ways, and that got me thinking about why exactly I like this game since it is basicly just repeating the same area over and over.

1. The graphics are superb. Granted, there are not a ton of varied environments or anything since you play through the same scenerio multiple times, but I think the environments that are there are very well rendered. 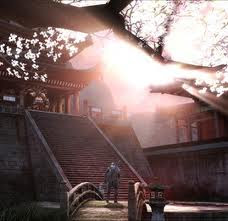 2. The opponents are ALL epic. Every warrior or monster I face feels and looks like a real challenge. They are bigger than my character, and many of them look mean with spikes, teeth, claws, large weapons, or a combination of all of these. 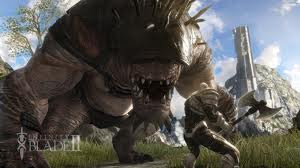 3. Finding random treasure has never been so fun! The dynamic in this game for finding random treasure is to quickly click on it as your character moves through a "cut-scene" from boss to boss. If it weren't for this feature, I probably wouldn't pay much attention between the bosses, but this keeps me engaged.

4. I love that my gear levels up. It is a really neat concept that I gain XP as my gear gains XP. There is also a lot of gear that has some very unique visuals. 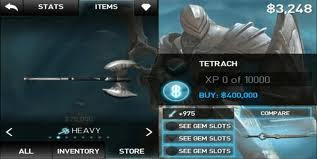 5. Insta-death exists. I've come up against a few things that kill me pretty quickly, and I've died a time or two simply from exploring, but since I just start back over at the same spot with all of my money, gear, etc. in tact, it doesn't feel to penalizing. It does, however, add to nervousness factor as I explore through.

I don't think I've ever been as intrigued by a game before. Looking at this game on the surface, I should hate it . . . It is definitely on rails; I like a bit more sandbox . . . there are no quests and no real story-line . . . I am repeating the same area over and over . . . I like a more strategy oriented combat instead of live-action . . . but I'm loving it!
Posted by Craftygod at 3:25 PM No comments:

Light Side vs. Dark Side Choices

One of the big draws for many playing Starwars: the Old Republic has been the extensive dialogue that allows the player to make choices moving you toward more of a dark side or light side persuasion. This has been interesting for me, but it seems that there are a couple issues with this system that are a bit, for lack of a better term, wonky.

First, when you start the game with a new character, you are forced to choose between a Republic or Imperial character class. These are obviously dark/light side aligned character classes, so it seems that some of this choice has been made for you from the very beginning. Yes, you do have the option of picking dark side dialogue choices while playing a Republic character and vice-versa, but for the most part the choices you have are still very much "light" in aspect.

Second, some of the choices you are given simply don't make sense. For instance (SMALL SPOILER ALERT) in the Trooper/Smuggler starting area, you are asked to recover some medicine that was stolen from Republic troops. After finding the "thief," you find out that it is a cat-lady (don't remember the race) that stole this medicine to help a community of poor refugees, one of which, a young boy, stands with her complaining about an aching head. Now, it seems that these medical supplies have now been stolen from the cat-lady "thief," and it falls to you to recover them. After recovering the supplies, you must decide whether to return them to the cat-lady and her refugee boy or to the original owners, the Republic troops. Playing a trooper, I decided that our troops needed those supplies, they were rightfully ours, soliders were dying, and while I felt for the cat-lady and her refugees, there had to be another solution besides theft. With this decision made, I headed off to the officer who gave me the original quest to return the medical supplies only to find that this was the "dark side" choice! How could returning an item that was rightfully owned be "of the dark side??" This made little sense to me. I can understand how helping the refugees would be a good thing, but to do it through theft and dishonesty didn't seem like a "light side" choice at all.

I really like the concept of dialogue choices that have an impact on your character and on how you play him or her, but I wish this could have been implemented in a bit different way.

First of all, have every character start without picking a Republic or Imperial side, and have the choices made move them toward one side or the other. I really don't understand the insistence on MMO's to have players pick a side and then to have no communication or interaction with the other side; this obviously doesn't reflect reality. I understand this may cause some issues in PvP, but simply allow players to choose the side they would like to represent in each battle or have PvP start only after the character has chosen a side based on conversation choices, etc.

Second, don't allow players to see the affect their choices will have until after the choice has been made. I know I can turn this option off, but I just can't make myself do so. I have compromised and put it on the "hover over" option to see which choice will cause me to go more to the light or dark side, but if this wasn't an option at all, I think players would spend a bit more time thinking through the consequences of their choices in every single conversation.

Third, have choices that make sense. Don't give situations like the ones I outlined above and then throw in the fact that they are dark/light choices. Make both of them light side, with more points given than the other, or give a third choice that is obviously dark side like maybe keeping the materials for myself or destroying them so no one can have them.

I think that if the dark/light side choices were done in a bit different way, they could have been simply amazing. They are good now, just not amazing.
Posted by Craftygod at 2:24 PM No comments:

So, last night I finally get done with chapter 1 of my class story on my Sith Assassin. After seeing the culmination of that part of the story (a bit of a twist in there), I was instructed to return to the Imperial Fleet. Upon arriving there, a screen popped up informing me that I could now choose a Legacy Surname.

A Legacy Surname? What was this? I had no idea what I was being asked to do, so I quickly opened up my internet browser and starting reading. It turns out that this is a name added to your character that provides him or her with a last name or a "title" that reads "The *insert name*
Posted by Craftygod at 9:01 AM No comments:

I've read a lot of chatter lately about how much Star Wars: The Old Republic needs a Looking for Dungeon system implemented, so that got me thinking about what I would want to see in such a system.

1. It should only be implemented for Flashpoints and/or Operations. Heroic content should remain as is, and folks should have to find their own group while on the planet where the heroic content exists.

2. It should allow players to "queue" up for one or more Flashpoints/Operations from any where in the Universe. I would like to see some type of checklist where you can pick multiple FP/OPS and then go to whichever fills up a group first.

3. It should NOT insta-warp you to the entrance of the FP/OPS ala WoW. I think there is a lot of depth lost with this mechanic, and I think this promotes the "stand around all day in one place" attitude.

4. It should NOT be cross-server. I understand the benefits of cross-server grouping, but I really hate what has happened in WoW since this was implemented. Namely, the groups have gotten so impersonal that now my character, who I have lovingly leveled, equipped, transmogged, thought about, developed, etc. is not known by his name, Tykoon, but simply as "Tank" or "Warrior". It has gotten to the point where LFD groups don't even see the names of the characters they are grouped with, simply their functions. I would like to see a system that doesn't take away the personal part of the game.

If this was implemented in SW:TOR, I think it could be a huge benefit that would allow a lot more people to experience what are some pretty good adventures in the Flashpoints and Operations.
Posted by Craftygod at 8:44 AM No comments:

I have recently been playing Star Wars: the Old Republic, the new MMO from Bioware, and I'm loving it! I'm not sure if my tastes in video games have changed since I'm a bit more "long in the tooth" nowadays, but I am really enjoying the leisurely pace that TOR sets with its cut-scene dialogues. When playing WoW, I have always been someone who pushes hard to reach max level as each new x-pac comes out so that I can reach end-game and stay competitive with everyone else doing the same. I've never been much interested in alts either because I've always felt like that was just repeating stuff that I'd already seen and done. Because of this, with seven years spent on WoW, I currently have only two max-level characters.

All of this is different in TOR. Now, I'm enjoying the questing; I look forward to the cut-scenes because the conversation choices are helping me develop my characters. And notice I said "characters"; that's right, I'm playing multiple characters at the same time because I am enjoying the story line of each, and I'm enjoying the differences in my characters. In fact, I've already created a character for all 8 classes in the game, though some of these are still below level 10. At this point, I have every intention of playing all of them to see the different story lines.

I've been reading lately that people are starting to leave TOR, and many of those leaving are disappointed with their experiences. I can honestly say that had I approached TOR with the same attitude that I approach WoW, I would probably be max level with my one and only character and bored with the lack of much end-game in TOR. But, honestly, these two games don't feel the same to me at all, so I'm not playing them the same way. The best description I've heard of TOR so far is "a single-player game you can play with your friends." That's the experience I'm getting out of it thus far.
Posted by Craftygod at 12:21 PM No comments: