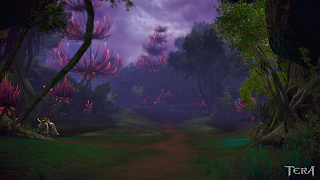 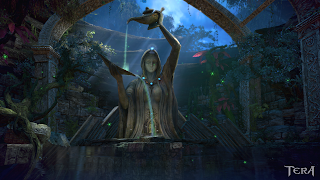 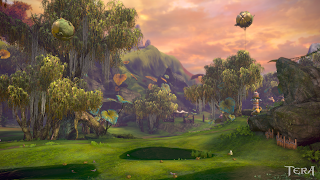 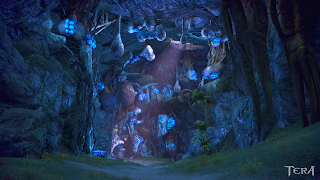 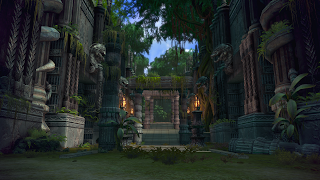 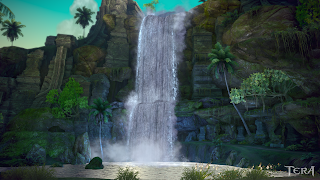 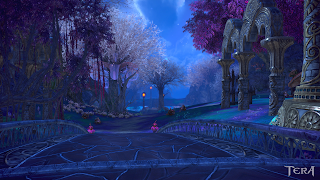 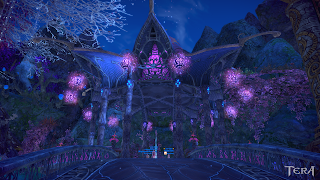 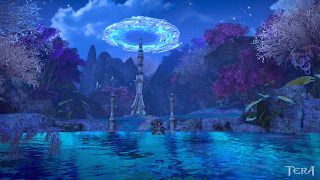 I continue to be amazed by the graphics in this game.  I've been playing almost daily for over a month now, and still, every single day I find myself standing still and admiring the scenery.  This is such a beautiful game.  In fact, the last three images above came from a "dungeon" . . . not exactly a crawl through a dark cavern.
Posted by Craftygod at 11:37 AM 2 comments:

Bhagpuss recently posted about his experience with the TERA trial allowing folks to play the Prologue to the game.  Unfortunately for Bhagpuss and many others that may have given this a shot, the prologue to TERA is a terrible representation of what the game has to offer.  I've been playing TERA since release, and I hated the prologue; my wife felt the same.

Happily, En Masse got wise to the problem, so they have changed the trial offer to a full seven days of play allowing you a chance to create 8 different characters and level them all to 23.  Now, this is the way a trial should be done.

I really encourage anyone who wants to give TERA a shot to do so.  I keep asking myself why this game has flown below the radar for so long.  It simply seems that no one is really paying it much attention, but I can attest to the fact that TERA is doing a lot of things right.  The combat is excellent; the graphics are superb.  Even a lot of the little "quality of life" additions are great in TERA.

To find out more about the free seven day trial, go to https://tera-support.enmasse.com/app/answers/detail/a_id/433.  This will answer any questions you may have about how the trial works, as well as, get you started on setting up your own account.

I still remember the first time I heard about the cow level in Diablo II.  Was it a myth?  Was it a reality?  Was it the delusion of a few folks who had eaten one too many steaks?  I really wanted to find out if it was for real.  Like so many things, the cow level piqued my interest because it was different, unique, and undiscovered.  I really think I would have enjoyed being an explorer (if there was money in it, and if I never had to traipse through the jungle, the desert, the tundra . . . ok, maybe not such a good explorer.)

Anyway, after playing for quite awhile in D2, I finally found the cow level.  It has been more than a decade since, so I don't really remember how one would go about finding the cow level or how you would get into it, but I do remember spending a lot of time there farming drops and killing the Cow King over and over.  Back then, the cow level looked like this . . . 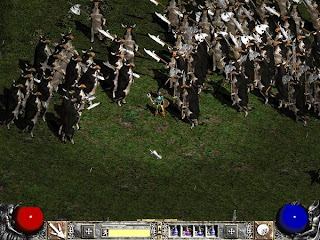 The areas outside Tristram, but this time filled with cows wielding halberds instead of zombies, skeletons, etc.

That brings me to this morning when a couple of my friends told me they had opened up the "Cow Level" in D3!  I was amazed; I was excited; I immediately wanted to see it!  They invited me to their group, and I clicked on the flag to teleport to them.  And, this is what I saw . . . 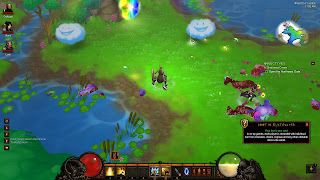 What the . . . ?  This was the "Cow Level"??  Actually, it isn't called the Cow Level anymore.  Now, it is called Whimseyshire, and it is made up of rainbows, fluffy clouds, unicorns, and flowers . . . that attack you. This was the perfect level for anyone who wanted to kill all of the stupid levels in Super Mario Brothers or any other platformer with clouds and flowers . . . 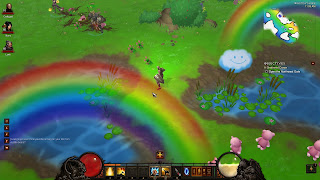 This level was pretty amazing as you were able to run through and chop unicorns in half!  That's right, look back at the first picture . . . the unicorn split in half . . . lengthwise!  Amazing!

No, this ain't your daddy's cow level.
Posted by Craftygod at 6:18 PM 2 comments: