Upon hitting the upper 30's level, my archer was granted access to the Cultist's Refuge, the 3rd instance dungeon in TERA.  I wasn't sure exactly what to expect from a place called "the Cultist's Refuge," but what I found was not what I expect.  Again, I was amazed by the scenery that has been produced for this game.  I have simply never seen better rendered environments and NPCs in any other game I've played.

The dungeon started at the entrance portal; no shimmering, little, blue oval here. 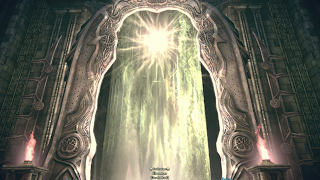 Once inside, I was amazed by the buildings themselves and how everything was so clear and precise in the way it was rendered.  Even the lighting and shadows were dynamic, and I simply had to stop and take in the view for a few moments before continuing on into the dungeon.  (Please ignore the stupid orange leopard onsie I'm wearing.  It seems that TERA insists on dressing me like a fruit-loop instead of a warrior.) 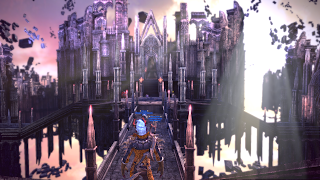 That view was pretty impressive, and I was really excited about going into this dungeon; I was hoping the bosses would be as equally impressive as the setting.  I wasn't to be disappointed . . . 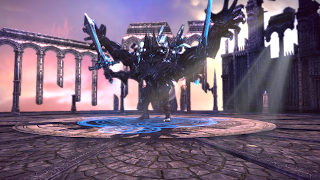 This was the first boss we encountered.  A huge monster of some sort wielding two impressive, glowing swords.  During the encounter, he also summoned in a variety of other large, imposing beings at intervals.  All-in-all, this was a good, hard encounter and lots of fun. 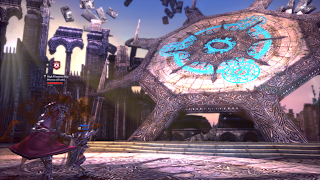 This was the second boss encounter.  When we first entered the room, we were met by a seemingly harmless woman, but as we approached, she began to grow substantially until she became the sorceress/witch shown here.  I don't remember her being a particularly hard fight, and we moved through without much of an issue. 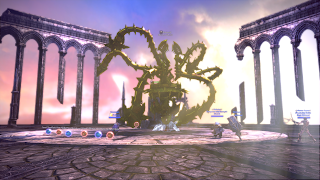 The most impressive by far was the last boss of the dungeon, a huge machine of some sort with tentacles ending in dragon heads of all things.  This was definitely an original boss; I don't think I've ever seen anything like this in any game I've ever played.  The novelty of the boss quickly wore off as we started fighting, and we all realized this boss was tougher than any that had come before.  In fact, we lost our tank at one point during the fight, but with some good play and a quick resurrection scroll we were able to complete the fight without a wipe.

I enjoyed this dungeon so much, I ran it twice.  This is a rarity for me in a leveling dungeon, because I usually only want to do them one time through to see them and complete the quests, but i really just didn't feel like I was able to take it all in the first time through.

TERA continues to hold my interest with amazing graphics, fun combat, and well thought-out areas and dungeons.  If you haven't tried TERA because of all the scantily-dressed hoopla, then I truly think you are missing out.  I am trying to put together a post that discusses that subject in more depth, but for now, I highly recommend that folks at least give TERA a chance before writing it off completely.
Posted by Craftygod at 6:30 PM