Over the weekend, I found myself browsing around in our local video game store while my son was picking out an XBox game to buy with a gift card he'd been given as a gift.  As I was looking around, I saw several posters, advertisements, etc. about TERA Online.  Now, I have read some stuff about TERA, so I wasn't completely clueless about the game, but up until I saw it in the shop, I hadn't really considered it as an option for me.

So, call it an impulse buy, general boredom, or what-have-you, I decided to take the plunge and buy TERA to try it out.  I figured with the 30-days of play that came with the purchase of the game, I was only out the $40 for the box if it was totally horrible and I never played again.

Installation went easily enough, and after an hour or so of installing, patching, setting up an account, etc. I was creating my first character.  I played through the weekend, and now I have a level 21 Archer waiting for me when I get home this evening.  From my two full days of play (minus Saturday evening when I was raiding DS on WoW), I took away some positives and negatives about TERA.

1.  Graphics - This game looks AMAZING!!  I really love the art, and everything is rendered to a wonderful degree.  I literally found myself just sitting and looking at a panoramic vista from the top of a hill several times.  The visuals do have the "dream" quality I've come to expect from asian anime type art, but I've always liked that style, so I'm really finding it appealing.  The first Pegasus ride I took from the starter island over to the mainland was especially nice as I got to enjoy the scenery while flying.

2.  Combat - I had read a little about the combat in TERA and how it was "live action."  I didn't really know what that meant until I started playing.  From the very beginning, the combat feels good.  I enjoyed the fact that I had to keep moving so I wouldn't get hit, and I enjoyed having to make sure several enemies were lined up together to use certain AoE type attacks.  I'm playing an Archer, and so far, I'm really enjoying the combination of long-range and short-range fighting techniques used in tandem.  I don't think the combat is vastly different than other MMO's I've played; you still have to press buttons that go on cool-down in a rotation, but the fact that there is no auto-attack and no lock-targeting make you think a bit more about what it is you are doing.  Even regular trash fights while questing have a bit of an "epic" feel to them.

3.  Crafting - So far, I've not done a ton of crafting; I think my highest skill is somewhere around 60 right now, but the way in which the crafting is done is pretty good.  It is simple to understand, and everyone can do everything, no picking only certain crafts to pursue.  However, so far, I've not started training all of them because they are quite expensive in both materials that must be farmed and in coins to buy the reagents that are needed to complete any pattern.  At the same time, it is also complex enough, with pieces coming from several different sources, that it was enjoyable.

4.  Leveling - I feel like the speed for leveling is pretty good so far.  I didn't fly through the first 10 levels like I do in WoW, but at the same time, I didn't feel like there was ever a time when the leveling was dragging.  I found that I remained in a questing area or hub about as long as I would expect, and in each one, the quests ramped up in difficulty as I played.  All of this felt right to me, and thus the leveling experience as a whole, at least through the first 20 levels, has been very smooth.

1.  Character Models - As anyone who keeps up with MMO's knows, there has been quite a stir across the internet about some of the character models used in TERA.  Accusations have ranged from "cheap and tawdry" all the way to "pedophilia," and I would agree that the character models are a bit over the top.  As I was starting the game and trying to make my first character, I went through all of the races and classes to see what was offered.  As I was going through, I literally laughed at several of the character models just because of the ridiculousness of them.  For instance: 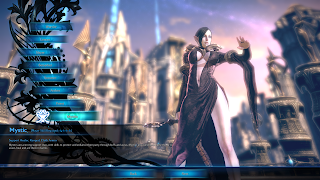 This is the High Elf Sorceress model.  Obviously, there is an emphasis on showing skin here with cleavage all the way to the belly-button and a slit in the skirt up to her hip.  While I'm not necessarily offended by this, I certainly don't prefer it in my video games.   A second example (and this one really made me laugh): 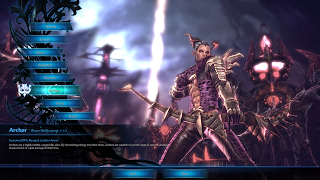 This is the Castanic Archer.  As I scrolled through the different races and classes, I already had an idea I wanted to play an Archer to begin, so I was looking at this class especially.  I had already been thinking that the armor was wholly inappropriate for any actual combat, but when I saw this guy in his purple leopard print onesie I knew this was the character for me!  I mean if I'm trying to hide in the woods and underbrush and fire my bow from safety, I'm sure purple leopard would be the perfect camoflague.  I had to show this one to my wife because I simply couldn't believe it was for real.

Ultimately, the character models are not what I would choose; however, I noticed that once I got into the game I really didn't even pay attention to that anymore.  So, while this is a negative, it is not one that will make me quit playing.

2.  Chat - I really thought I had seen the worst of in-game chat while playing WoW, but I was soooo wrong.  The chat channel in the newbie area alone is full of cursing, arguing, trolling, and every other type of unsavory communication imaginable.  It did get a little better after moving to the main continent, but even there, I started wondering how anyone was getting any playing done with all of the inane comments.  The up-side of this is my conviction that with the number of total ass-hats on the chat in TERA, Barrens is finally safe!

**As a side-note, because there is a "newbie" island where everyone starts and levels for the first 11 levels, gold-spammers are essentially non-existent after you leave the starter area.  They don't seem to want to spend the time leveling for 11 levels just to be banned shortly after hitting the mainland.  Whether this was intended or not by the developers, it is a pretty nice set-up.

3.  Quests - I had read before playing TERA that the quests were pretty generic with no good story-line through them.  I would agree with this; however, I'm not sure it is any worse than other MMO's I've played.  I've never been one to pore over quest texts, and the same holds true here.  There is a story that goes through the quests I've been through thus far - it seems that they are all leading up to the first dungeon, Bastion of Lok, that becomes available at level 20.  There are still the pre-requisite "FED-EX" quests, the "kill 10" quests, and the "go talk to that guy" quests that all MMO's seem to have in spades.  There have also been a couple escort type quests which have been especially annoying because invariably the npc being escorted walks like an old woman with two bad hips.  I've never seen an npc moving so slowly!

Overall, I would say my experience with TERA has been positive.  Positive enough to continue playing after the first 30 days?  I'm not sure yet.  I am really looking forward to trying my first dungeon now that I'm level 21.  Last night, I saw that I had the required gear score to enter the dungeon, but by then I was out of time for the evening.  I hope to find a good group to run it this evening though grouping can be a bit of a chore it seems since there is essentially only one tanking class, the Lancer.

If you have played TERA, what are you impressions?  Do you think it is worth a subscription?﻿